A charming pup is convinced the world is against him! It takes patience and positive training to teach him how to relax.

This February, my friend, Thressa, asked if I could help her dog, Loki, a ten-year-old Portuguese Water Dog who is extremely well trained at all the basic commands but has been plagued by lifelong anxieties. He is fiercely afraid of other dogs and hypervigilant about anything coming near him, his humans, home, or car, reacting with loud barking, growling, and lunging at the perceived danger. None of their three previous trainers had been able to help Loki be more comfortable in the world. Thressa wanted Loki to enjoy walks around their neighborhood and hikes through parks with her, not pulling at his leash, scrambling to return to the safety of his home or car. She also had plans to meet up with friends, family, and their dogs later this summer but was anxious herself about how that could even be possible. After reading my newsletters and other socials, she became hopeful that I might be the missing link in their training. I immediately recognized that Loki is a “reactive dog,” and I agreed to offer my advice to help lower his anxiety.

We got together once or twice a week for two months. We made some seemingly minor adjustments to Loki’s world, such as not feeding him in a bowl and preventing his access to a window view, that had major positive effects. We identified his triggers and then modified his reactive behavior by using fun focus games, lots of Loki’s favorite treats, and calming activities, building positive associations with all of Loki’s triggers and teaching him how to relax. This process not only helped Loki but gave Thressa the tools to feel more in control of situations at home and out on walks. She reframed her mindset from “Oh no, here comes a dog!” to “Oh good! Here’s an opportunity for Loki to reframe his mindset.” We kept track of Loki and Thressa’s “wins” and “areas that weren’t quite there yet” and narrowed the gap between them every week. By the end of two months, we had changed threats into challenges and then successes, counting daily wins instead of disappointments.

Working with Thressa and Loki turned into a power-up experience for all of us. I was delighted when Thressa said, “Working with you has been the best thing that ever happened to me and Loki!” 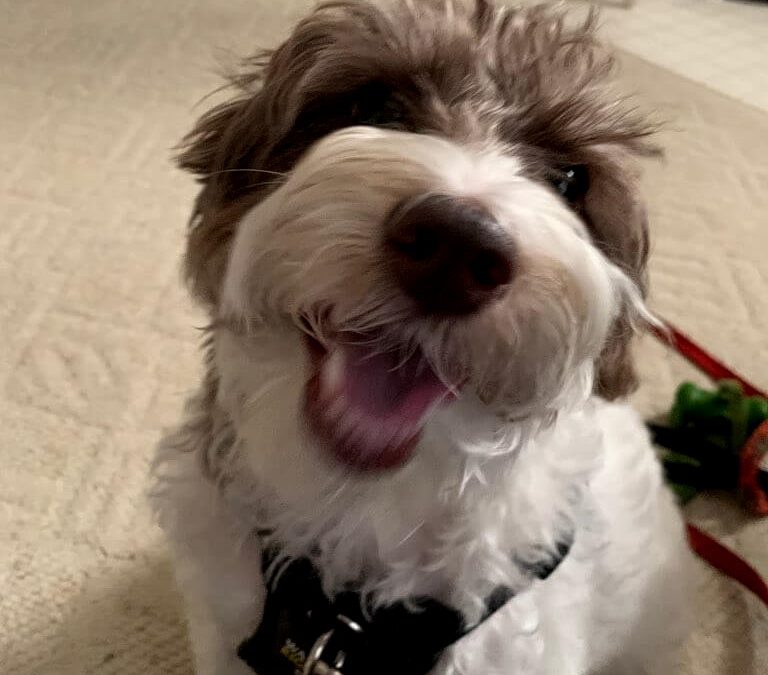 By Cindy Cook
Abby is a smart bundle of happy energy and she doesn’t shed!

My daughter Jill and I got Abby at 8 weeks old from Kinston, NC. She stole our hearts from the get go. She is an F1 Schnoodle meaning that her dad is a poodle and her mom is a Schnauzer. That makes her a great dog for allergies, for she doesn’t shed and her dander is very low.

Abby is so smart and loves to learn new things like playing peekaboo and is becoming a calm walking partner thanks to Crockett’s Critter Care. She is full of energy and loves her walks, will do tricks for treats, and is always ready for snuggles. Her intelligence amazes me every day. Her favorite toy is a worn out stuffed cat named Maw-Maw and her other loves are cheese, duck treats, and Mom’s cooking. For us, she is a small child in a “Fur-Suit” and we could not love her more. 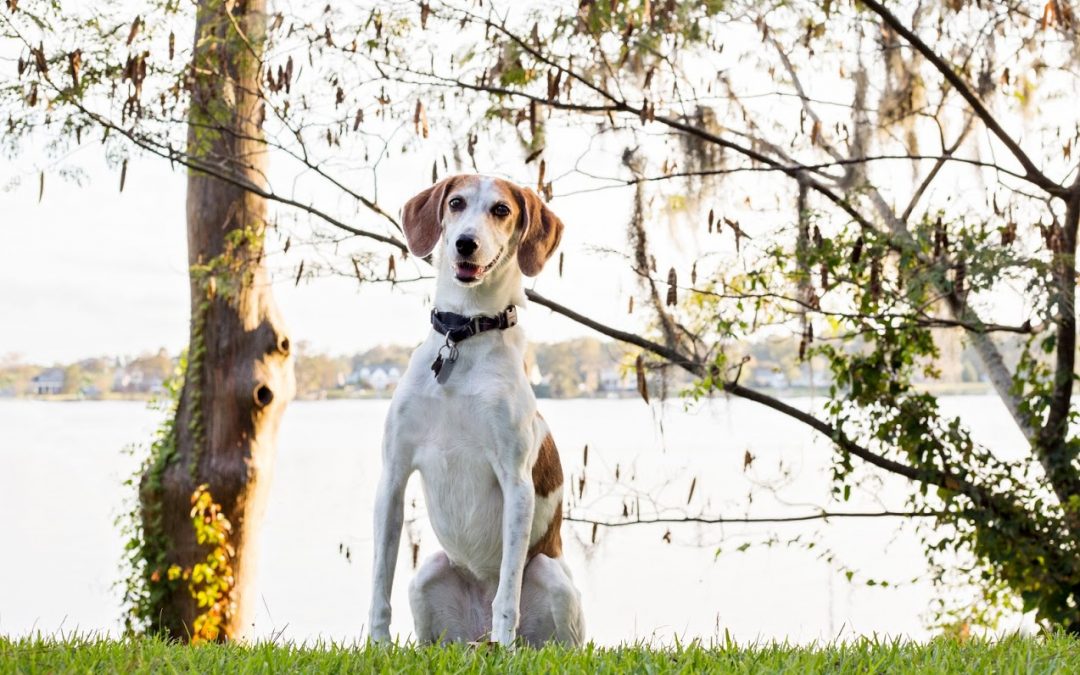 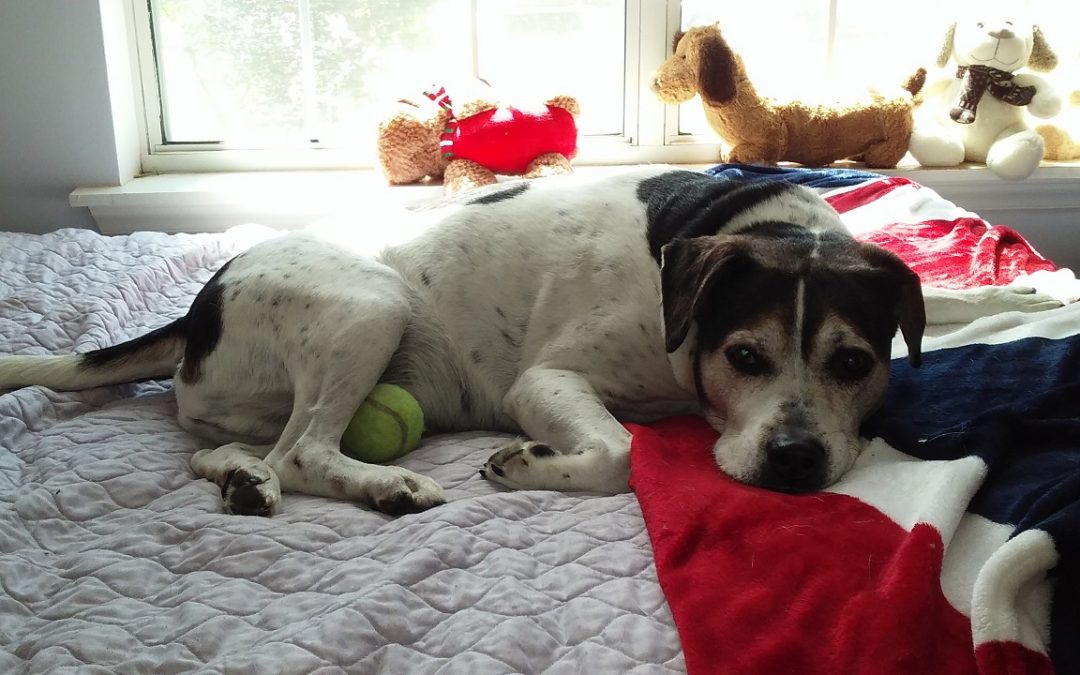 Maxi is a star in my neighborhood.  He is a hound of uncertain registry. His owner, Fiona, dotes on him and takes him for walks all over the county.  I know him well. He bays when he sees me and trots over for some treats. Ginger, my hound, is quite smitten with him.  We occasionally join them on walks.

Maxi came into Fiona’s life about twelve years ago when a co-worker asked her if she was still thinking of getting a dog.  She replied with an enthusiastic, “Yes”.  The co-worker then asked if she was interested in a puppy – to which she emphatically answered, “No”.  This small, pathetic looking puppy arrived at the office the next day and stole Fiona’s heart and changed her life.

On their first day together in Maxi’s new home, they made a special trip to PetSmart where it was discovered that Maxi loved balls.  He chose a little green one and proceeded to carry it everywhere he went.  Over the years his ball collection grew as he found more balls on his trip to the park.  In fact, Fiona’s car is full of balls because Maxi’s philosophy is that every stray ball needs a home with him.

Maxi is Fiona’s first dog.  It is amazing to me to see the joyful bond between them. True to his “hound” nature, he is a “good dog ambassador” to all of the children in the neighborhood who can’t resist giving him a pat on the head during his daily walk.  He has made a long and successful journey from his pathetic puppy beginning to a charming happy hound.  Woof woof! 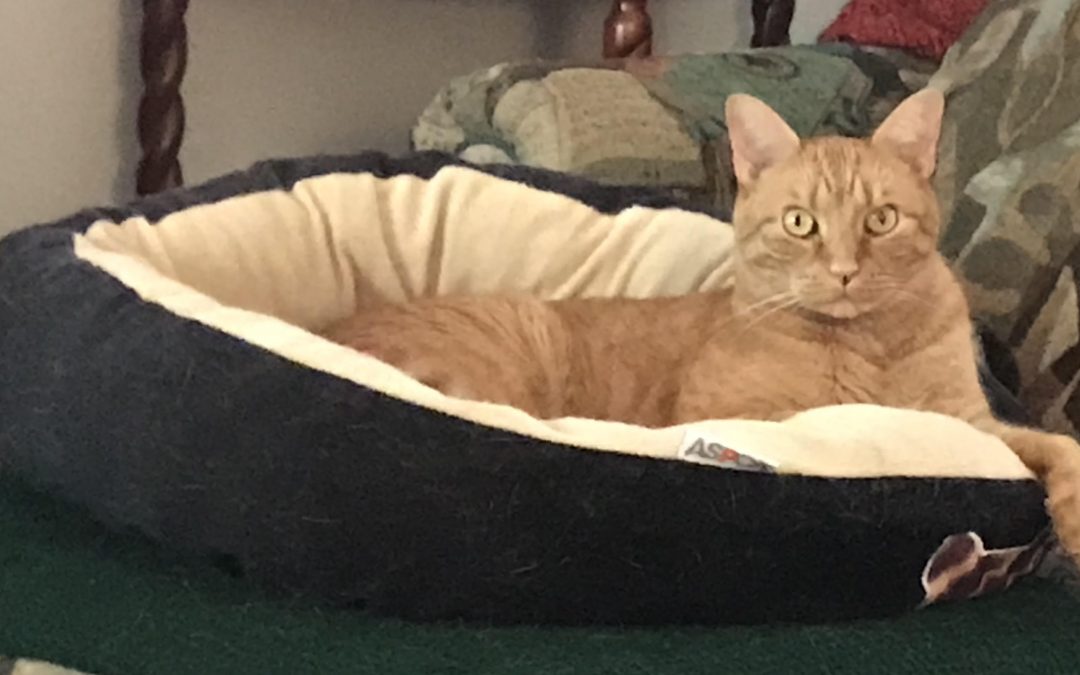 KitKat, our Ginger boy, came to us unexpectedly about seven years ago.  While we were visiting family out of state, a little kitten ran into their garage and wouldn’t leave. He was all alone and only about four weeks old.  We waited to see if his mother or siblings would join him – but no one did.  That weekend we opened our heart and home to a new furry companion.

He has remained an indoor kitty but still retains his outdoor instincts which we indulge by taking him for a lot of rides in his outdoor kitty carriage.  A great way to keep him safe and secure while still enjoying the outdoors.

KitKat loves to play and his orange tunnel with his spinning ball is his favorite toy.  When he is not keeping us company, he likes to hang out in “his” sunroom where he can keep an eye on the backyard birds.

His small circle of friends outside of family includes our pet sitter – his loyal caretaker since we brought him home. 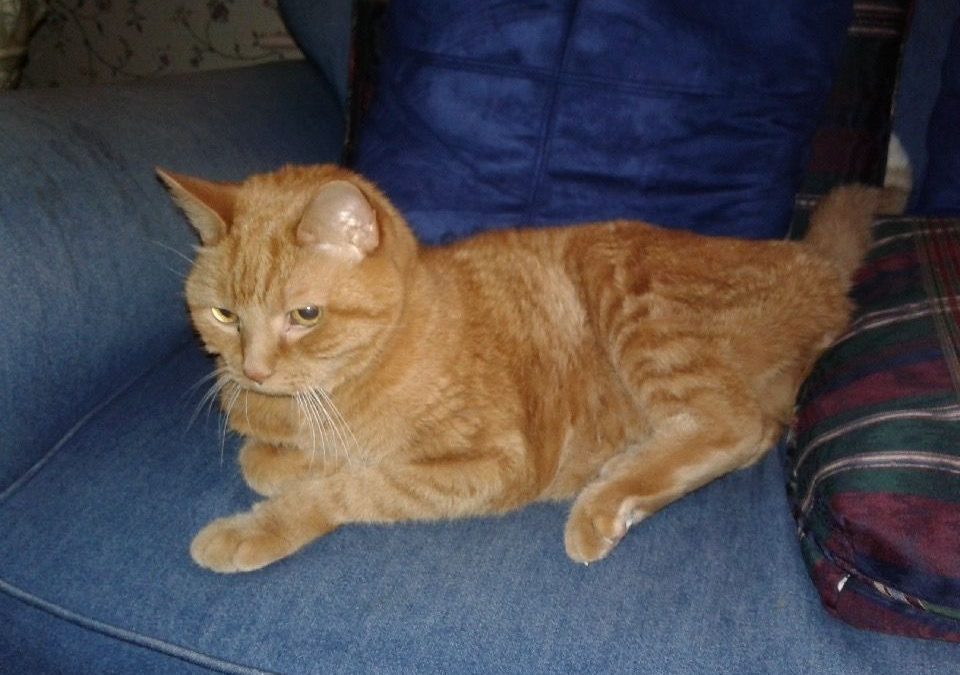 In August, 2002, I was visiting my cousin in Wilmington when we decided to visit PetSmart to see when they would have a pet adoption. Fortunately, they were having one that very night, and had just brought out several crates with new kittens. As soon as I saw two little orange tabby faces in one box, I claimed them for mine, male littermates, two months old, Gus and Grover. For two months I enjoyed being MomCat to two babies. Unhappily, Gus succumbed to FIP at four months old, and Grover became an only cat. He adjusted very well, taught us some games to play with him, and learned to take naps with us.

Grover has been a very sociable, friendly cat, not afraid of strangers, and has always been healthy. Now at age eighteen, he does nap longer but is still active. He claims every chair and bed in the house with a couple of favorites in each room. At his last “well-kitty checkup” the vet pronounced him a fine cat, and said to give him whatever he wants. He is still friendly, likes to cuddle, and sleeps at our feet. I am thankful for each day that he is still with us.